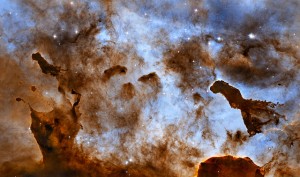 Several years ago, an international team of astronomers claimed that images from the Hubble Space telescope give evidence of 40,000 galaxies in a window of the night sky no larger than the size of the moon. Each galaxy containing billions of stars. (source)

Then I hear the prophet Isaiah say, “To whom then will you liken Me, or to whom shall I be equal?” says the Holy One. Lift up your eyes on high, and see who has created these things, Who brings out their host by number; He calls them all by name, by the greatness of His might and the strength of His power; not one is missing (Isa 40:25-26).

Over the years Dean Ohlman, host of Wonder of Creation, and I have had conversations about “the two books of God.” For a long time I felt that putting these two books side by side could have the effect of detracting from the inspired Scriptures, by which all else is to be weighed and measured. But I had to acknowledge Dean’s reminder that theologians have for a long time acknowledged the fact of God’s general and special revelation (i.e. creation/general and Scripture/special).

In addition, I’ve often thought about the fact that, in response to Job’s questions about why he was suffering,  the Lord asked Job to consider “the wonder of Creation” (Job 38-41).

I’ve also reflected on the way David placed the two books of Creation and Scriptures side by side (Psalm 19). I’ve thought about the Apostle Paul’s insistence that all people could be held accountable to what God has said about his own character and eternal power through what he has made (Romans 1:19-20).

The result is that I’ve become increasingly convinced that the Bible itself shows the wisdom of what Dean argues for. Reading God’s two books of creation and Scripture side by side seems to be not only God’s intent, but a basic source of the wisdom we all need—in the face of whatever personal challenges we all are facing today. As we read the Scriptures to understand that the one true God is distinct from his creation, so the creation itself enables us to read the Scriptures with a spirit of healthy, trembling, humility and trust.

Then my mind goes back to Isaiah. After talking about the overwhelming “message of the stars” he says to his own generation and readership, “[So] why do you say, O Jacob, and speak, O Israel: “My way is hidden from the LORD, and my just claim is passed over by my God”? Have you not known? Have you not heard? The everlasting God, the LORD, the Creator of the ends of the earth, neither faints nor is weary. His understanding is unsearchable. He gives power to the weak, and to those who have no might He increases strength. Even the youths shall faint and be weary, and the young men shall utterly fall, but those who wait on the LORD shall renew their strength; they shall mount up with wings like eagles, they shall run and not be weary, they shall walk and not faint” (Isaiah 40:27-31).

And together…don’t the two books of God, both merge into a single witness to The Eternal Word, by whom God made all that has been made… before suffering and dying in our place… to bring us to his Father (John 1:1-14).

« Previous: Biblical People Can be Dangerous Next: Whose Reality Grips Us? »
Vote on whether you think this post is something you'll be thinking about: