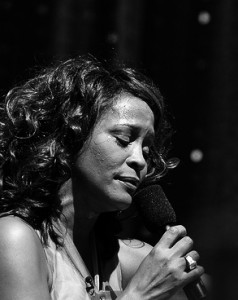 On the eve of the 2012 Grammy Music Awards, Whitney Houston died.

With her passing millions will remember a voice and songs that did more than make her one of the most recognized and awarded female vocalists in music history.  Who among us can forget the emotions stirred by her endlessly played “I Will Always Love You.”

That some of Whitney’s songs seemed to draw on a spirituality beyond the music might have something to do with her early years. According to an online encyclopedia: “At the age of 11, Houston began to follow in her mother’s footsteps and started performing as a soloist in the junior gospel choir at the New Hope Baptist Church in Newark, where she also learned to play the piano. Her first solo performance in the church was “Guide Me, O Thou Great Jehovah.”

« Previous: Getting Attention Next: Vanishing Disciples »
Vote on whether you think this post is something you'll be thinking about: