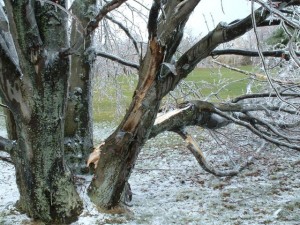 Did Jesus die on a tree not only for us, but also for the tree on which he died?

The question made me uncomfortable.

But I couldn’t deny that a broken trust and resulting curse have done more than tear  into our humanity. As the Bible sees creation as full of the glory of God, it also describes all nature as groaning with us under the present weight of the curse.

Yet, the vision of Revelation sees another day when “Every creature which is in heaven and on the earth and under the earth and such as are in the sea, and all that are in them” declare,… “Blessing and honor and glory and power Be to Him who sits on the throne, And to the Lamb, forever and ever!”  (Rev 5:11-13).

Maybe it’s not just a matter of whether we dare suggest that Jesus died not only on a tree but for the tree.  Maybe, most realistically, it’s just a matter of time before we join all nature in declaring that the creation that was cursed because of our sin, has been liberated by the same death that Christ endured for us…

…“For you shall go out with joy, And be led out with peace; The mountains and the hills shall break forth into singing before you, and all the trees of the field shall clap their hands” (Isa 55:12)

« Previous: Toxic Truth Next: Why Trust? »
Vote on whether you think this post is something you'll be thinking about: