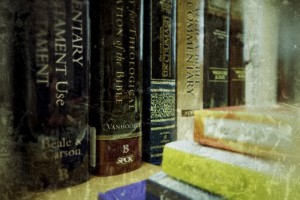 While wondering why trust is so important to God that he put a deadly tree in the middle of paradise; and then made “trust” not only the means of avoiding that tree—but the antidote for being born of the parents who didn’t—I’ve been thinking about a  short song (Psalm 131:1-3).

In the process I bumped into an ad for a book titled “Higher Unlearning”, a related blog called “Unlearning 101” and then a quote about “the practice of “Vu Deja”‘, the opposite of “Déjà vu” in which the author says, “We’ve all experienced déjà vu, looking at an unfamiliar situation and feeling like we’ve seen it before. It turns out the most successful and creative people flip this around and consciously practice “vu déjà”–looking at a familiar situation as if you’ve never seen it before.”

In that light, it looks like we’ve never seen this day before. Nor, on second look, can any of us clearly see the line between why we must trust our eyes (5 senses) as we step through it, and why we cannot afford to do so.

So would you agree that the dangerous tree in the middle of the garden must have been—not only an opportunity to experience the gift of freedom, but also a reality check? As much as we might live in the “likeness and image of God”… isn’t it such an understatement to say…We don’t see as God sees. We don’t know what God knows. We cannot really see beyond this present moment, just as we can barely begin to see or understand all that is in it (this moment)…

When we begin to think about what we don’t know—that we can so easily ignore while being preoccupied with the few things we do know—we can, I think, begin to see why trust is so important to God, and to ourselves.

It must have something to do with what the king of Israel was thinking when he wrote the lyrics of what we now call “Song 131”. He (that king) in turn foreshadows the One who brought trust to fullness of meaning. If Jesus had to pray… and if Jesus said that he didn’t do anything without depending on his Father’s eyes and words…

« Previous: Why Trust? Next: Notes on a Diplomat »
Vote on whether you think this post is something you'll be thinking about: