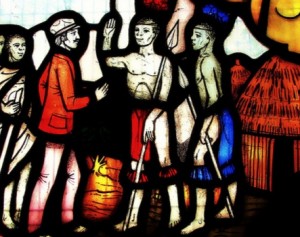 Many of our generation probably know little more about a legendary African missionary, doctor, and explorer than the smile of “Dr Livingstone I presume?” While some question the historicity of those actual words, they apparently were reported by the New York Herald Newspaper in 1869. The Herald had sent Henry Morton Stanley to Africa to search for Livingstone, and Stanley himself reported them in a letter to the Herald when he finally located and introduced himself to the only white man in the region.

A fascinating article in BBC online, however, goes on to tell a far more amazing story. Recognizing the 200th anniversary of the birth of David Livingstone, the news service draws from the work of author Stephen Tomkins and his book, “David Livingstone: The Unexplored Story.”

While there is much in the article that will probably cause it to be forwarded and read around the world, I found most compelling Tomkins’ account of an African Chief who may have been one of Livingstone’s only converts.

As the article relates, Livingstone himself had discounted the chief as an utter failure after discovering that the chief had gone back to one of the many wives that he had divorced, at Livingstone’s prompting, to convert to Christ. Author Tomkins suggests that upon being found out, the chief  “repented, and told Livingstone: “Do not give me up because of this. I shall never give up Jesus. You and I will stand before him together.”

Yet as the article relates, the missionary did give up on him and left for the north to continue his celebrated exploration and mission.

The rest of the story, if accurate, is eye-opening. Tomkins goes on to say that years later it turns out that “In the estimation of Neil Parsons, of the University of Botswana, [the chief] did more to propagate Christianity in nineteenth-century southern Africa than virtually any single European missionary”. Yet, “For European missionaries [the chief]was a frustrating puzzle,”… (for a number of reasons) “a half Christian and a half heathen”.

If you have access to this BBC online article, I think you will find it as interesting and provocative as I have. Once again, it raises questions about the immediate expectations (including moral and cultural demands) that western missions have been known to put on the message of Christ—and the failure that has been presumed when “newborn converts” fail to live up to the missionaries’ expectations.

« Previous: As the Music Plays Next: Mixing it Up »
Vote on whether you think this post is something you'll be thinking about: