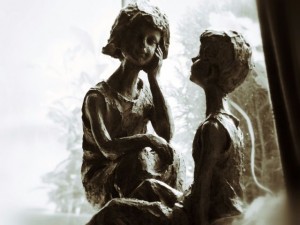 Marwa was 12 years old, frightened by the wail of air raid sirens and deafened by the concussions of falling bombs. Desperate to do something, anything to escape the terror and confusion, she grabbed her 8 year old sister Adra, and together they began to run. With nowhere to go, they ran, chased by the sound of the explosions. According to a BBC journalist, Marwa remembers running and running until one more explosion left her without Adra, and never able to run again. She thought her life was over.

As unfortunate as Marwa was, she lived to experience the kindness of a foreigner who had a heart for children of war. At great expense he got Marwa medical treatment and all that was involved in getting her a prosthetic limb. At  personal risk he faced Marwa’s war traumatized neighbors when they told him that if he ever came back again, they’d kill him. He discovered that a war torn community is a hard place to try and do good.

Even though Marwa’s benefactor showed that he was willing to stay involved for the long term, life remains difficult for her. With parents gone, she tries to look after her younger brothers and sisters.

The outsider, in turn, reflects on all that he has not been able to do. He couldn’t give a little girl her leg back, or erase the horrors of the war. He couldn’t meet the deep needs of “the little girl whose life was filled with a sadness she never put into words, and who stopped going to school because the children laughed at the way she walked.” Yet he also sees another side. On return visits, he also sees a young woman smile, and even giggle when she sees  pictures of  how bad her hair looked when she was in the hospital.

As I read the article, I couldn’t help but think about how “Christ-like” the “outsider” was– while at the same time realizing how unable he was give Marwa and her world real hope.

Christ-like examples show us why we need Christ. Where but in God coming to our rescue could we find the kind of hope we need?  Who but the One who said he came to reveal the heart of his Father could deliver the promise of blessing to all the families of the earth (Gen 12:3)? In what other true story could we find or imagine greater courage, sacrifice, love, and results that could be offered– not just to some– but to all, and not just for now, but forever?

Note, I decided to delete and close the comment thread on this post to honor blog guidelines.

« Previous: Mixing it Up Next: The Value of a Riddle »
Vote on whether you think this post is something you'll be thinking about: