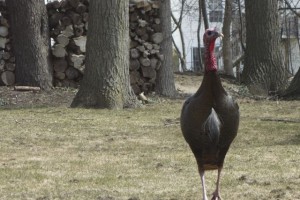 In the somber remembrance of a crucifixion, followed by the joyful celebration of resurrection, many of us have once again reflected on events that solved one of the longstanding mysteries of the Bible.

For thousands of years, the identity of the Savior of the world was a mystery. The promise of One whose heel would be bruised while crushing the head of the serpent was like a great riddle woven together with countless other details of blood sacrifice, ritual uncleanness, and the destiny of a fallen family.

But in saying that one of the greatest of all riddles has been solved, we all know that many mysteries of the Bible remain. There is so much that we don’t yet understand.

For example, if we move from the great drama of Jesus’ death and resurrection to something that seems trivial by comparison, what are we to make of that unusual and somewhat embarrassing detail of the unnamed young man who lost his clothes and ran away naked on the night of Jesus arrest? (Mark 14:51-52)

Some suggest that, because we are not told his name, nor the significance of his embarrassing moment, we should allow the young man to remain in the shadows of the text as unexplained information. After all, one mark of credible historical observation is that there are always loose strings of fact that remain unanswered. By contrast, fictional drama has the luxury of being able to weave together all clues and distractions before the story is over.

That seems to be a good point, as some have made it.

But would we then go a step further to suggest that the humiliation of the young man’s nakedness may be nothing more than a moment of comical relief in a tragic unfolding of events?

I don’t know for sure. But the fact that the very next words are that “they led Jesus away” makes me wonder how much of a nervous laugh the text could be suggesting.

If we assume that everything in the Bible, from Genesis forward, to Revelation backward, is a telling of the story of Jesus, does it make sense to quickly assume that a strange, unexplained detail, about an unnamed young man who has lost his clothes while following the arrest of Jesus—is simply there to add credibility, or a smile to the text?

What we do know is that within a few hours, the Teacher the young man is following is going to be hanging naked, nailed to a tree, as his executioners gamble for his clothes.

Here’s what I’m wondering. Is it naïve to think that the Gospel writer, Mark, or the Spirit of God, has used the experience of a young man’s unwanted embarrassment to awaken us to the willing humiliation of Another?

Thinking about this has caused me to recall recurring nightmares of my childhood in which I dreamed that I showed up in elementary school in my underwear. Now I smile. Now it seems so comical. But waking up was such a relief.

So, here’s where I’m landing for now. Regardless of whether we can say for sure what the detail of the young man who lost his clothes was all about, it has awakened in me a sense of nervous memory, that has deepened my thoughts about the humiliation of the Savior who was stripped, nailed, mocked, and gawked at by passersby…for us– because of what our shamelessly naked first parents lost.

And in that light, let me push an admittedly unexplained detail further. Is it possible that, in the young man’s embarrassment, we find ourselves, our intimately human story, and a perspective from which the Cross of Christ becomes eternally and infinitely better than waking up from our worst nightmares? Is this too much of a stretch? I’d be interested in your thoughts one way or another.

PS The turkey showed up on Easter Sunday. I first noticed him looking in my window. I thought he was looking at me. But I think the big Tom was seeing his own reflection in the window. Seemed like he had his holidays mixed up. But maybe not.

« Previous: The Riddle of an Empty Grave Next: What’s the Difference? »
Vote on whether you think this post is something you'll be thinking about: