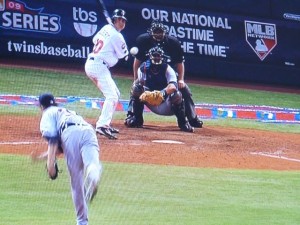 As baseball season returns, I bumped into an old story that still makes me smile. My apology to cricket fans, and the March Madness of college basketball.

Three baseball umpires are each asked how they call balls and strikes. The first explains,”If a thrown pitch crosses the plate between the knees and the shoulders, it’s a strike, otherwise it’s a ball.” When asked the same question, the second umpire replies, “If they’re balls, I call them balls. If they’re strikes, I call them strikes.” At which point the third umpire says, “They ain’t nothin’ til I call em.”

Reminds me of the way that we’ve been trying to explain the meaning of that unusual unexplained detail about the embarrassment of a young man in Mark 14:51-52. Some of our responses are focused on trying to find the facts. Others are reflecting the way we personally interact with what happened to the one who lost his clothes. Some of us are probably considering it an issue, or not, based on our own interest.

In this light, let’s move to a third question: What is the Bible talking about when it makes a distinction between “the clean” and “the unclean”? In some places there’s a rule to explain the difference (Matt 15:2); sometimes, it’s a matter of epiphany (a sudden personal realization about the nature or meaning of something) (Isa 6:5); and sometimes it seems to be a matter of personal perspective, as when Paul writes that unto the pure all things are pure, but for the defiled, nothing is pure (Titus 1:15).

Seems to me that, as with the three umpires, there is something to the thought that we see things not only as they are, but as we are. What’s your call? I think this is worth thinking about together.

« Previous: Mysteries of the Bible Next: Jacob and Israel »
Vote on whether you think this post is something you'll be thinking about: