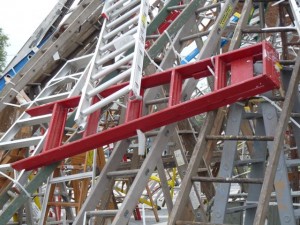 As a child I remember singing the spiritual,  Jacob’s Ladder. We sang the words. But I never thought much about them.

Now, many years later, I find that I’m ready for another look. I’ll need you to be patient with me because the story turns out to get a little involved. But I’ve found some unexpected turns and surprises along the way.

After committing fraud to obtain the family inheritance, Jacob leaves home to avoid being killed by the older brother he has cheated.

When night comes, he makes a pillow out of some rocks, falls asleep, and dreams of a ladder reaching from earth to heaven. On this ladder he sees angels going up and  down (Gen 28:10-12). Above the ladder Jacob sees one who identifies himself as the LORD and God of his fathers, Abraham and Isaac.

In his dream, Jacob hears God say words very similar to what Abraham had once heard. The LORD  tells Jacob that he is going to give him the land on which he is sleeping; that he is going to multiply and bless Jacob’s children, and that through Jacob’s family all the families of the earth would be blessed. (Genesis 28:13-14).

Then God assures Jacob, the fugitive, that he is going to be with him, and that he will protect him, until he does all that he is promising to do (Gen 28:15).

When Jacob wakes up from his sleep he is overwhelmed with the sense of being in a house of God, and at the gate of heaven (Gen 28:16-17).

As Jacob’s journey unfolds, he finds a place to stay and work with a Syrian relative of his mother. As it turns out, in this relative, Jacob meets his match.

The Syrian whose name is Laban, tricks Jacob into marrying a daughter that Jacob doesn’t love. Over the next 20 years, this shrewd and dishonest father-in-law gets Jacob to work 14 years in exchange for two wives, and six more years for cattle. During that time Laban withholds promised wages 10 times. In the end Jacob tells Laban that if God hadn’t been taking care of him, he knows that Laban would have left him with nothing (Gen 28:41-42).

As it turns out, however, Jacob returns to his homeland with 2 wives,  the sons who would eventually become the patriarchs of the 12 tribes of Israel, and a big herd of cattle.

As this large and growing family of children left Syria for Jacob’s homeland, Laban made a pile of rocks and proposed a covenant saying, “May the Lord watch between us while we are apart” (Gen 28:49).

The words sound gracious and hospitable today. But they were  words that expressed the distrust that Laban and Jacob had for one another. After 20 years of living together, Laban the Syrian, and Jacob the father of what we now know as Israel, sensed how much they needed God to protect them from one another (Gen 28:50-52).

Yet Jacob is not done being deceived. The sons he brings home betray him in his old age.  They sell one of their youngest brothers to slave traders, and tell their father his favorite son was killed by a wild animal.

That younger brother (Joseph) ends up in Egypt where he eventually is promoted to rule over the whole land,  second in command to the Pharaoh. From that position he is used by God to become the Savior not only to the Egyptian people during seven years of severe famine, but also to become the protector and provider of  the brothers who, long before, had betrayed and sold him into slavery for 20 pieces of silver.

Now fast forward to the New Testament. As Jesus begins three years of public life, he introduces himself to “an Israelite in whom there is no guile” (deceit) (John 1:46).  The man, whose name is Nathanael, gets involved in a brief conversation with Jesus that leads him to recognize that Jesus isn’t just a son of Israel, Joseph, and Nazareth (John 1:45), but rather the Son of God (John 1:49).

Then Jesus says something that sounds very familiar (John 1:51). He predicts that Nathanael will see “heaven open and angels ascending and descending on the Son of Man.”

Seemingly out of the blue, a clear reference to Jacob’s ladder. How do we begin to put all of this together?

Who among us can’t identify with the fearful, self-protective, deceitful hearts of Jacob and Laban? Who doesn’t need the God who promises to be with a man like Jacob, to protect him, and to provide for him– until he fulfills his plan to bring good, and blessing through him– to all the families of the world.

Jacob shows us our own heart. Nathanael points us to the One who gives fulness of meaning to Jacob’s ladder.

Heaven and earth coming together in One who gives us a better Father, a better Son, and a better Spirit.

I don’t know about you, but the more I see the way the whole story of the Bible comes together in Jesus, and the more I see how gracious he is in coming to the rescue of people like Jacob– the more I feel like I am “in the house of God” , at “the Gate of heaven”, at the foot of a ladder that is the One we were made for.

« Previous: Jacob and Israel Next: In Our Search for Answers »
Vote on whether you think this post is something you'll be thinking about: