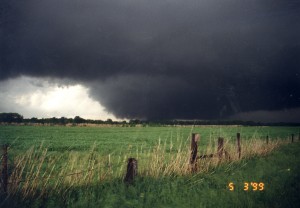 Once again “end of the world” associations are being given to a natural disaster. For example, an online video shows video of the destruction observed by a survivor who emerges from a storm cellar to capture images of  apocaplyptic destruction.. The only audible words are, “The Lord gives and the Lord takes away.”

Other survivors though have had a different reaction to the same losses. CNN’s Wolf Blitzer did an interview among the rubble with a delightfully poised and grateful young woman who, with small  son in arms, had made a quick decision that saved their lives. The  mother described how, instead of climbing into the tub with her  son and pulling a mattress over them,  she ran to her car and drove “south” far enough to avoid the tornado’s direct hit of her home. She returned some time later to find her frantic husband pulling through the rubble thinking that he had just lost his wife and child.

When Wolf said, “You must thank the Lord for your decision”, the young woman smiled sheepishly and looked down without answering. When Wolf repeated his question, she looked up at him and said, “I’m an atheist.”

They laughed together and Wolf said (apparently referring to her decision to run from the house), “well you made the right decision.”

In some ways, the “no God” response was surprising. It’s not what we usually hear in such times. But we all know that it is increasingly common for a younger generation to be choosing not to believe.

In this case, the mother added that she does not blame some for thanking the Lord. I’d love to know her story. Choices to believe, or not to believe, and then to express them standing in the middle of such devastation—don’t just happen.

Interestingly, as she spoke graciously of those who do “thank God” for such survival, I certainly don’t find myself blaming her (or those) who don’t thank God for enduring and surviving such catastrophic loss.

What are your thoughts?

« Previous: The View from There Next: Can We Think Our Way to God? »
Vote on whether you think this post is something you'll be thinking about: