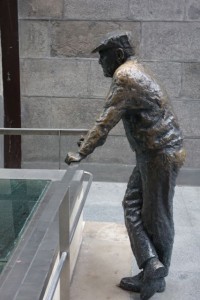 Honor to whom honor is due…

When we consider any soldier who has died or been wounded in the service of others, and when we consider how many have paid that ultimate price, we have only begun to consider the inequalities of life…

Jesus knew we’d consider him and his Father unfair. He told a story about a landowner who contracted early in the morning with a group of workers to work for the day for a certain sum of money. Throughout the day that same landowner occasionally went out and hired other groups of workers with assurance that at the end of the day he would do right by them.

Understandably, those who worked longer and harder felt the landowner was being unfair to them.  But he didn’t back down. Pointing out that they got what they had agreed to, he reminded them that it was his right to do with his money what he wanted—and that they were being envious because he was generous (Matt 20:1-16).

We are left to wonder about the full implications of the story.  But Jesus seemed to make one thing clear. God is aware of the inequalities of life, and by making his Son both the Savior and Judge of all, the One who died for us is in a position to– in the end– surprise us by his generosity.

If grace through Christ is God’s equalizer, he has also given us an entitlement smasher of our own. The God who says to give honor to whom honor is due, urges us to owe no one anything but to love one another… for all of the laws of God are summed up in one: to love our neighbor as ourselves. (Rom 13:7-10) (also Gal 5:14). “Who is our neighbor?” is a question Jesus answered with another story.

Is it possible that inequality is at the root of our existence to remind us of our dependence on the only one who is in a position to do right by us in the end?

Am wondering whether anything could be more honoring to those, and the One, who have given their lives for us… than to honor their memory by focusing on the needs of others rather than our own illusion of entitlements?

That’s how Steve from WV started to answer the questions I raised yesterday… I’m with him on this one. In the end, it seems to make more sense to go with what we’ve been given than to doubt the goodness of God over questions of unfairness he has not yet answered…

« Previous: Honor to Whom Honor is Due Next: A Sleepless Night »
Vote on whether you think this post is something you'll be thinking about: