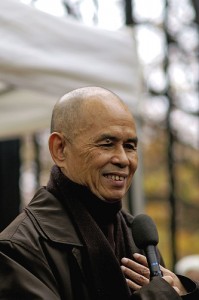 The University of Chicago’s Wisdom Research website is presently featuring a news report about an 87 year old Zen Master who has been asked by Google execs to help  bring a sense of humanity back into their corporate work culture.

According to an article in The Guardian, doors are opening for this elderly Buddhist monk even though he is being counter-cultural in his appeal for mindfulness and meditation to return the peace and happiness that have been lost in the rush for economic profitability and material success. Regarded by business people as a breath of fresh air and a return to sanity, many are seriously weighing what he is saying about our need for compassion and sustainability to begin undoing the damage being done to ourselves and to our environment.

At a time when so many are trying to get religious controversy and polarities out of public life, the article reflects a growing awareness of what science and technology cannot give us. Through a call to spirituality that allows for personal choice and thoughtfulness, matters of the heart are being considered in places that have worshipped change, efficiencies, and profitability.

Upon hearing this, we might be inclined to be critical of the 87 year old Master, the religious dogma he represents, and suspicious of corporate execs who will do anything to keep their ships afloat.

What if we instead honored the wisdom of this elder with the admission that we all desperately need lives marked by mindfulness, meditation, compassion and thoughts of sustainability (i.e. thinking in terms of how we can use for the common good the limited resources entrusted to us rather than self-destructing in blind consumption).

What if more followers of Christ were known for the kind of thoughtfulness, compassion, courage and wisdom that come from him (James 3:15-17)?

Do we need to begin the conversation with our conviction that Jesus is the only ultimate source of wisdom in this life and the next, or start with the assumption that people will hate us for trying to bring Jesus into their lives? Could it be time for the  kind of wisdom that begins with where our world, neighbors, and co-workers are —rather than where we are?

Let’s talk about it…

P.S. I’ve removed some of the earlier questions and copy from the end of this post, since– without face to face conversations they could have been misleading.

« Previous: Politically Correct? Next: Ligers and TomTatoes »
Vote on whether you think this post is something you'll be thinking about: