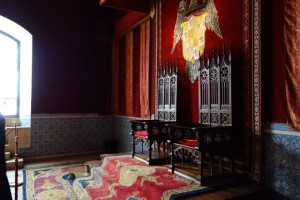 The word “manifesto” is often associated with the Socialist Manifesto of Marx and Engels (1842). But in a more general sense it is a public declaration of intentions as issued by a government or a political party.

If Jesus had a manifesto, or inaugural address, it probably would be what we now call his Sermon on the Mount. Outlined by the not yet recognized,  long awaited, King of promise (Matt 4:12-17), this teaching moment followed a captivating display of power (Matt 4:25-25) and announced the principles of his rule (Matt 5:1-10). It began with his declaration of what it means for his citizens to be considered fortunate, to be congratulated, well off, and blessedly happy.

Even though the pronouncements of value and principle that we find in Jesus’ kingdom manifesto should not be considered as stand-alones (apart from him), each of them, individually and together, deserve careful and fresh thinking.

Consider, for instance, his first statement: “Blessed are the poor in spirit, for theirs is the kingdom of heaven” (Matt 5:3).

Why would Jesus declare the desirability of what could sound to us like a mark of the “have-nots” of the world?

Who is he talking about? Could the King who had begun moving toward his own public execution have in mind the citizen who is beginning to see and believe things like:

My interests are not more important than the interests of others.
My thoughts are not more deserving of consideration than the thoughts of others.
My ways are not better than God’s ways.
God’s desires for me are wiser than my desires for him.
The pain of others is as deserving of attention as my own pain.
What God wants to do for us is worth far more than my efforts to take care of myself— and those who depend on me.
My sense of what I need is far less reliable than God’s understanding of the same.
My idea of happiness is of little importance compared to heaven’s view.
My idea of what makes a good or bad day might be far different if I could see things through the window of the King’s palace— or eyes.

In Eugene Peterson’s paraphrase of The Message, he fleshes out the first principle of Jesus’ kingdom like this:” You’re blessed when you’re at the end of your rope. With less of you there is more of God and his rule.”

Could anything here be a thought starter for why Jesus began his declaration of a new kind of social order with what many might see as a “have-not happiness”? Most importantly, as we think about this kingdom value together, is there a way in which we can see that Jesus himself was the ultimate example of what it means to be poor in spirit… and blessed in the highest sense?

« Previous: Living with Questions Next: A Time to Cry »
Vote on whether you think this post is something you'll be thinking about: