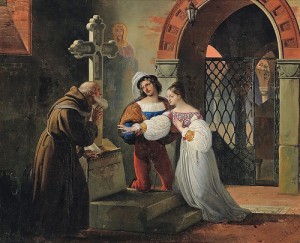 An article on the Geekosystem website says that a professor from the University of Manchester, has published a paper suggesting that students of literature have been misinterpreting the first line of the old English, heroic epic poem Beowulf for 200 years.

The article  was too complex to draw me into the debate. But I understood an illustration given in a couple of posted comments . They suggested that the professor’s point is similar to the normal mistranslation of some lines from Shakespeare’s Romeo and Juliet.

According to the string of comments, the familiar line, “Romeo, Romeo, wherefore art thou Romeo” makes no sense in context.

A second person goes on to explain that the confusion comes from not understanding that “wherefore” means “why” in Elizabethan usage. Juliet, therefore, is not asking where Romeo is but rather why he is who he is. That, the commenter suggests, leads right into Juliet’s monologue about how, if Romeo were from a different family she would be able to love him. In other words, “the line makes sense in context. It’s just not a context that the common reader is familiar with anymore.”

While I still can’t make much of the Beowulf mistranslation, Juliet’s misunderstood line sounds like another illustration of what happens when the Bible is or is not read with an understanding that fits its immediate and wider context.

As the greatest of all love stories, the storyline of the Bible—moving from Christ the Creator to Christ the Savior— gives a context that, in a much greater way, parallel’s the longing of Juliet.  God’s problem also is not that he doesn’t know where we are. Rather the issue is why we are who we are, and whether we are living within a family relationship that enable him to show us how much he loves us.

« Previous: Elementary Watson Next: Terror in Tacloban »
Vote on whether you think this post is something you'll be thinking about: