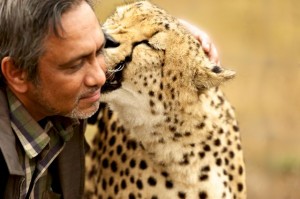 What do we have in common?

A BBC African news story tells how four Kenyan villagers out ran and then  captured alive two cheetahs that had been killing their goats.The owner of the goats said that the large cats had returned repeatedly to kill 15 of his animals.

So how could these men run down, on foot, the fastest animals in the world? The villagers were quoted as saying that they waited until the hottest part of the day and then outlasted the animals in a four mile chase. When the big cats couldn’t run any further they were captured and turned over to the Kenyan wildlife service for relocation. While cheetahs can reach a speed of 64 miles an hour in three seconds, and up to 75 mph in a chase, they can only maintain that kind of speed for short distances (i.e. 1600 ft). After being chased on foot for four miles they were exhausted and could run no further.

The collapse of these cheetahs remind me of the experience of Job that we’ve been talking about. When first hit by tragic losses, he responded with faith and courage (Job 1:20-21). Seven days later, his trust in God seems to collapse as he curses the day he was born (Job 3:1-3).

Yet, as we know, Job survives his losses, ends up with restored faith in God and is remembered by the New Testament for his endurance (James 5:11).

But are we to assume that Job endured in his own strength? Or is it likely that a  later conversation between Jesus and Peter helps us to understand how Job outlasted his enemy (Luke 22:31-34)?

The prophet Isaiah also gives us words that probably help us to understand the sustaining strength that Job was receiving  from the Lord,,, even when he felt so helpless.  (Isa 40:30-31).

Am thinking that as the cheetahs of Kenya run with the speed and limited stamina that God has given them– before being captured and relocated to a better place— they mirror our experience.

And as we’ve been noting together, the bigger story beyond Job’s need and rescue did eventually show up  (Job 19:25-26), but not in the way that Job could foresee. Instead the God-advocate he longed for would come to suffer for us…with us…and with a result that would offer hope not only at end of our own strength—but at the end of our lives.

PS The picture above is of a friend who made an unexpected friend at a  South African wild animal reserve.

« Previous: So What? Next: The Kindness of Alois »
Vote on whether you think this post is something you'll be thinking about: