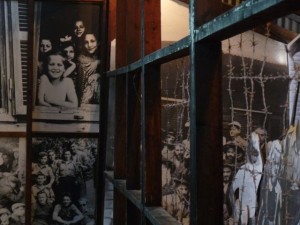 Ilie and his sister Deborah are survivors of “The Night of Broken Glass.” In their book, An Uncommon Journey, they describe the fear they felt as they hid from the soldiers who had been ordered to ransack Jewish businesses and synagogues. They say they also will never forget the kindness of Alois, a young military officer, who risked his life to tell their father, “Gather your family tonight. Tell them to come here. Keep everyone inside. You will not be touched.” They remember later hearing the voices and boots that stopped at their door, and then moved on. In their words, “We were passed over. We were shielded by Alois. We were saved.”

But what about those who didn’t have someone like an Alois? Or, what about the Egyptians who died on the night of Israel’s first great Passover rescue from Egypt?

Would it help to suggest that the point of both is not to answer all of our questions. Their purpose is to gratefully remember a savior.

Does it help even more to remember that the story of Israel’s safe Exodus didn’t end there. According to the New Testament, that first Passover pointed to the God who would eventually, and voluntarily, sacrifice his own life, for the whole world.  The result is that  anyone who trusts in him will be able to gratefully remember forever the One who saved our everlasting life.

Does it help to shift the focus from questions about someone else’s Uncommon Journey… to an answer now offered to all?

« Previous: Cheetah-like Next: The Legacy of a Peacemaker »
Vote on whether you think this post is something you'll be thinking about: