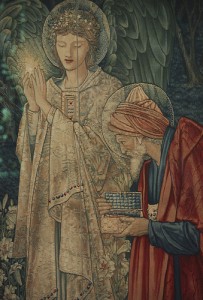 An online BBC article about a celebrated Hungarian-born, British concert pianist is titled Musical Exile: Why Andras Schiff won’t perform— or even set foot—in Hungary. The article goes on to quote Schiff as saying, I have been threatened that if I return to Hungary, they will cut off both of my hands. I don’t want to risk physical and mental assault.”

The article went on to explain that, because Schiff had spoken out against government policies of his homeland, he was regarded as an enemy. In that sense, his story could have been anyone’s story.

At some point we all discover that it is dangerous to speak against the domestic, political, religious, or military sentiments of our own neighbors or homeland. Schiff is not alone in knowing that fools rush in where angels fear to tread. It was, after all, an angel that warned the parents of Jesus to hide him in Egypt from the small-minded rival who wanted to kill him.

It is in the darkness of the night, that the star of Bethlehem shines the brightest. It is in a world like our own— where people like us threaten to cut off the hands of people like us, that the Savior and King of heaven came to bring peace with God and one another.

This is where the star of Bethlehem leads to such wonder. Who would have believed that the all-powerful Lion of the house of Judah would come to conquer the great Serpent of our souls as a helpless infant…and then as an innocent lamb?

That is the wonder of Christmas… a star appearing in a world where strategies of self-protection and personal well being dictate strategies of hatred, intimidation, violence, and death to our enemies.

So when the time came for the great enemy of our souls to be defeated, the long anticipated King of the Jews did not arm his disciples to throw off Roman occupiers. Neither would he grant his disciples’ request to call down fire on his rivals. Not by intimidation. Not by enlisting the rich and the famous. Not by might. Not by power. But by the Spirit of God, Jesus would conquer in a way that no Assyrian, Babylonian, Greek, Roman, or modern army has ever conquered.

By being born into the weakness of our humanity, the King of kings showed us how to be wise as a serpent but harmless as a dove. Two thousand years later, his willingness to live–for us, by dying, to win by losing, and to bring peace by loving his enemies, is giving us reason to be like little children caught up in the wisdom and wonder of the greatest gift ever given.

« Previous: The Voice Next: Christ and Culture »
Vote on whether you think this post is something you'll be thinking about: