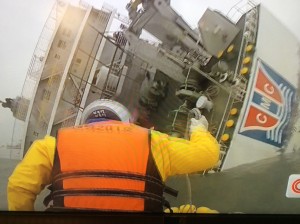 The story of a 71 year old woman who survived the tragic sinking of a South Korean ferry boat is full of mixed emotion.

As she lies on a hospitable be with a broken back, and her life, she expresses survivor’s guilt, and deep gratitude for the young man who hung on to her after she had given up hope. On the third try, he pulled her above the rising water that was rushing into the room where, moments earlier, she sat quietly watching a soap opera on TV.

According to the CNN online report, Her family wants to find the man — “even if we have to put up placards around neighborhood,” she says.

“I’m grateful. I want to thank him. I want to buy him a meal at least or hold his hand or give him a hug.

Survivor’s guilt, and deep gratitude for a rescue that is describable—while seeming neither deserved nor explainable— goes beyond the deeply personal stories of a South Korean disaster that has apparently taken hundreds of young lives.

On the weekend on which we give special remembrance to a far greater rescue, I’m thinking this story sounds strangely familiar.

« Previous: What are We Hearing? Next: There’s Still Hope »
Vote on whether you think this post is something you'll be thinking about: