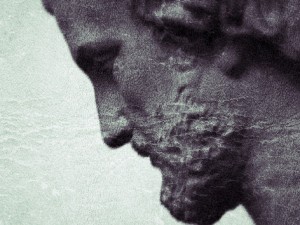 Or, by contrast, are we inclined to think first, and maybe even primarily, of the inspired Scriptures as the Word of God?

Am guessing we’d agree that the Old and New Testaments  exist as an inspired witness to the ultimate, living, and eternal Word and Son of God—who turns out to be our Creator, Sustainer, Savior, King, Lord, and Judge.

The distinction doesn’t seem small. Neither does it seem merely theoretical. According to the Apostle Paul, the written letter of the law can kill. The Spirit gives life. The Lord is the Spirit. And the Scriptures exist as a witness to him (2Cor 3:1-18).

Am wondering whether you have noticed that when a  conversation turns around Christ, i.e. what he says about the Father, i.e. what the Scriptures and our own circumstances say about our need of him, and i.e. how we are learning to read the whole Bible in light of what he has done for us…that our words are more inclined to be…  full of grace.

« Previous: A Time to Listen Next: Jonah and the Word of God »
Vote on whether you think this post is something you'll be thinking about: