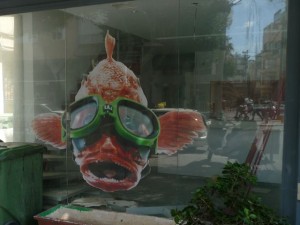 He was a Jewish prophet who, in the 8th century before Christ, spoke words inspired by God. His name, Jonah, meant “dove”—a bird regarded as a symbol of peace.

The Backstory– He was first known as a prophet who predicted that Jeroboam 2, the tenth king of the northern tribes of Israel, would conquer lands lost to Syria (2Kings 14:25) that had earlier been seized and controlled by king David (2Kings 14:28).

From what we later learn about Jonah, he must have found great satisfaction in a message that would signal a military victory for his people.

But that’s not the part of Jonah’s story that gets the most attention.

Jonah the Reluctant Prophet— Many of us probably grew up knowing Jonah as the prophet who tried to run from a God-given assignment and, as a result, spent three days in the stomach of a great fish, before grudgingly completing his mission.

When he  does finally speak in behalf of the God of Israel, he turns out to be a prophet of few words. The only record we have of what Jonah says to the people of  Nineveh is found in the fourth verse of the third chapter (Jonah 3:4).

At these words, the whole city cries out for mercy—and gets it.

A Question— What happened? How could it be?

How could God change his mind when the message was so clear—and seemingly unconditional? In forty days God was going to destroy the city (Jonah 3:4). This was the Word of God.

Is there any evidence that God asked… convinced… or forced Jonah to beg, urge, and plead with the citizens of Nineveh to have a change of heart that would turn them from enemies into friends?

Jonah’s Answer— The repentance of Nineveh is what he was afraid of. He knew the God of Israel was a compassionate and merciful God (Jonah 4:1-3).

Though unspoken, and undeclared, Jonah knew that there was more to the Word of God—than he had been asked to say to a people that he feared, resented, and hated.

The Bigger Picture— The New Testament later uses Jonah as a backdrop and parallel to Jesus. As Jonah’s story (and possibly grotesquely bleached skin?) of three days in the stomach of a fish signaled to the people of Nineveh that he had been sent by God, so Jesus’ story of rising from three days in the grave would be a compelling sign that he had been sent by a compassionate and merciful God. (Luke 11:29–32).

This may be another indication that— what we read in inspired written words— needs to be understood as backstory to what we are now introduced to in the life giving mercy and grace of the personal, living, and everlasting Word of God (1Peter 1:22-23).

« Previous: The Word that Changes Us Next: A Time to Ask »
Vote on whether you think this post is something you'll be thinking about: