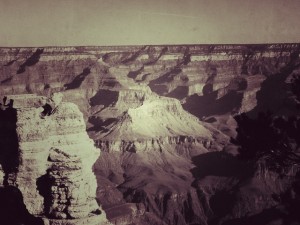 It’s been called a spiritual law: man is sinful and separated from God. The resulting word picture is a deep, uncrossable chasm between a holy Creator and the sinner.

What seems worth thinking about together, though, is how this separation looks in the unfolding story of the Bible.

Let’s back up and think about what happened after that telling moment when our first parents did the one thing  they were warned not to do. What did God do at that point? Did he act as if he were suddenly on the other side of a great gorge of separation?

We need to go slowly here. There’s no question that something tragic and immediate happened. Our first parents would never be the same again, and the legacy of their loss would be read in the story of every child born to them and their descendants.

But does the image of a chasm separating us from God do justice to the resulting relational interaction between God and our first parents?

And what I’m also wondering is how we would compare the response of the God of Genesis— to the actions of One who would later be rudely characterized as “the friend of sinners”?

« Previous: A Time to Ask Next: Staying with the Story »
Vote on whether you think this post is something you'll be thinking about: