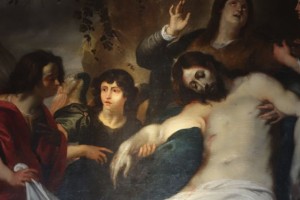 A summary of the day’s international news seems especially difficult to absorb. As families and loved ones of the missing 239 of MH370 begin to receive compensation for losses that have no financial equal, conflicts in Iraq, Ukraine and so many other regions represent the real fear and insecurity that stretches beyond all national and personal boundaries.

In the middle of such news I found a BBC item describing the growing political divide in the US. Admittedly, in so many ways such partisan polarization doesn’t begin to compare with the imminent threat of war—or worse. But what does deserve our attention is the way that followers of Christ have been caught up in a political battle that has a way of eclipsing our first love and calling.

This problem of losing our voice in a lesser conflict isn’t new. This past week a friend and co-worker who has a special interest in the legacy of CS Lewis sent me a couple of quotes, that reflect a similar problem of another time and place.

“I think almost all the crimes which Christians have perpetrated against each other arise from this, that religion is confused with politics. For, above all other spheres of human life, the Devil claims politics for his own, as almost the citadel of his power. Let us, however, with mutual prayers pray with all our power for that charity which “covers a multitude of sins.” Source: Letters: C. S. Lewis/Don Giovanni Calabria (10 August 1953), para.1-3, p. 83

The friend went on to write, “The definitive C. S. Lewis article on Christians misusing politics is in “Meditations on the Third Commandment” (1941). The most salient section is found on pp. 196-198 in the book “God in the Dock”  edited by Walter Hooper. “By the mere act of calling itself the Christian Party it implicitly accuses all Christians who do not join it of apostasy and betrayal.“

Given the choice to divide over real problems, or to unite around the only real solution, am once again wondering whether followers of Christ in the US— or in any part of the world— have the luxury of choosing to lose our distinct voice and message by the way we argue over partisan economic interests and ideologies? (Philippians 3:7-8)

« Previous: Body Swap Next: When it Comes to Specifics »
Vote on whether you think this post is something you'll be thinking about: