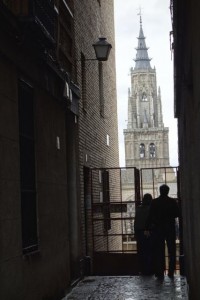 A friend put me on to reading some 19th century novels by George MacDonald who, according to  Wikipedia, had an influence on such other writers as Oswald Chambers, CS Lewis, GK Chesterton, Lewis Carroll, WH Auden, and JRR Tolkien.

Even though the 19th century vocabulary and style are not always easy to push through, I’ve since been absorbed in MacDonald’s storytelling, understanding of human nature, and awareness of the love of God.

The first book I read is about a curate (i.e. Church of England parish minister) named Thomas Wingfold (The Curate’s Awakening) that tells about a young pastor who suddenly finds himself found out by a young atheist who senses the pastor’s lack of conviction and considers him a spiritual fraud.

As a result, Wingfold realizes that it’s true.  He doesn’t know what he believes— and hasn’t even made the effort to decide what he doesn’t believe.

The journey he begins, however, turns out to be as honest as it is unsettling to his upscale, self-satisfied congregation. In the twists and turns that follow, he ends up choosing to be mentored by two unlikely members of the community that others regard with pitiful dismissal. Before long he is expressing to his flock not only his personal struggle, but also his fascination with One he had long talked about without ever knowing.

In the grace that eventually wins Wingfold’s mind and heart, he finds himself needing answers for a young congregant who confides that she is hiding a dearly loved younger brother who is going mad in the awareness that, while high on drugs, he has murdered the young woman he loved.

Wingfold knows  there is no freedom in hidden wrongs. So he speaks to the young conflicted woman, and to his congregation, through a Sunday morning message.  He talks about what it is like to live in the awareness that we have committed a life-ending wrong that can never be erased, only to wake and realize it was only a dream. Then he went on to eloquently make his case that such relief and elation is nothing compared to the glory of the mercy and forgiveness of God for wrongs we have actually committed (without ignoring legal guilt and consequence).

In a sequel to that book,(Paul Faber, Surgeon) the subplots of human nature and grace multiply and deepen as Wingfold continues finds himself challenged by the bold atheism of a village doctor; the self-righteous meanness of the church community; and then the deep doubts of a older pastor who, though now retired, finds himself unable to live in the faith he had endorsed.

At some point, Wingfold prays in the presence of this older pastor in a manner that reveals the honesty of heart that I’ve alluded to above. I realize that pulling it out of context might not work, that this is fiction, and that the language is old. But see once if you sense any of the realism and honesty of a story that I’ve tried to summarize.

“God of justice,” Wingfold begins, “Thou knowest how hard it is for us, and Thou wilt be fair to us. We have seen no visions; we have never heard the voice of Thy Son, of whom those tales, so dear to us, have come down the ages; we have to fight on in much darkness of spirit and of mind, both from the ignorance we can not help, and from the fault we could have helped; we inherit blindness from the error of our fathers; and when fear, or the dread of shame, or the pains of death, come upon us, we are ready to despair, and cry out that there is no God, or, if there be, He has forgotten His children.

There are times when the darkness closes about us like a wall, and Thou appearest nowhere, either in our hearts, or in the outer universe; we can not tell whether the thing are ready to despair, and cry out that there is no God, or, if there be, He has forgotten His children.

There are times when the darkness closes about us like a wall, and Thou appearest nowhere, either in our hearts, or in the outer universe; we can not tell whether the things we seemed to do in Thy name, were not mere hypocrisies, and our very life is but a gulf of darkness. We cry aloud, and our despair is as a fire in our bones to make us cry; but to all our crying and listening, there seems neither hearing nor answer in the boundless waste.

Thou whom Jesus called Father, we appeal to Thee, not as we imagine Thee, but as Thou seest Thyself, as Jesus knows Thee, to Thy very self we cry—help us, O Cause of us! O Thou from whom alone we are this weakness, through whom alone we can become strength, help us—be our Father.

We ask for nothing beyond what Thy Son has told us to ask. We beg for no signs or wonders, but for Thy breath upon our souls, Thy spirit in our hearts. We pray for no cloven tongues of fire—for no mighty rousing of brain or imagination; but we do, with all our power of prayer, pray for Thy spirit; we do not even pray to know that it is given to us; let us, if so it pleases Thee, remain in doubt of the gift for years to come—but lead us thereby. Knowing ourselves only as poor and feeble, aware only of ordinary and common movements of mind and soul, may we yet be possessed by the spirit of God, led by His will in ours.

For all things in a man, even those that seem to him the commonest and least uplifted, are the creation of Thy heart, and by the lowly doors of our wavering judgment, dull imagination, luke-warm love, and palsied will, Thou canst enter and glorify all. Give us patience because our hope is in Thee, not in ourselves. Work Thy will in us, and our prayers are ended. Amen.”    From, The Complete Works of George MacDonald

« Previous: The Games we Play Next: Questions about Questions »
Vote on whether you think this post is something you'll be thinking about: