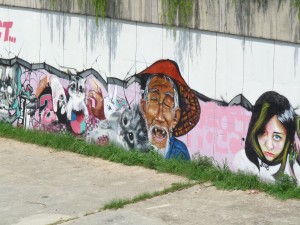 I found a quote the other day that intrigued me. Attributed to Confucius, it read, “Social disorder often stems from the failure to perceive, understand, and deal with reality. And that social reality is tied up with language.”

Since I was reading words out of context, I did some checking to see if there was evidence that Confucius really said this, and if so, what he meant. What I found is that the quote represents a basic element of Confucian thought called “rectification of names.”

Confucius apparently believed that if names and words correspond to reality, they carry with them a sense of identity and right behavior that is necessary for the cultivation of social order.

The implication seems to be that seeing and calling life as it is—while being able to name objects, people, relationships, and ideas as they really are— is necessary to share the spaces and times of our lives—together.

But what happens when we find ourselves, or those we love, on the wrong side of words—and reality? What happens when  words are used to label us as being part of other people’s problems? What happens when, by the definition of our social order, we are found to be bad, broken, problematic, and no longer useful?

One option is to try to manipulate language to push back against those who view us as being either wrong and out of step with their reality. Words then become both the means of argument and the chosen meanings that we argue about. It’s probably somewhere in the background of the Apostle Paul’s warning to not become embroiled in the kind of disagreements about words that divide and ruin us (2Tim 2:14).

Yet what makes Paul’s approach to words so important is that he was writing to those who were learning to see words and reality in the light of what he called “the word of truth”.

According to another writer by the name of John, this Word— whose name gives meaning to every name (John 1:1-3)— is the One who has come to bring grace and truth (and new social order) to the mess of language and tangled reality in which we find ourselves (Hebrews 1:1-3) (John 1:14-18).

This is the social order of the Word who has come offering a rescue and reality far greater than the recent heroic helicopter rescue of the Izidis (lit. worshipers of God) stranded on Mount Sinjar. This is the Word who urges us to love one another as he he has loved us.

« Previous: Theology With a Limp Next: Christian Mysticism »
Vote on whether you think this post is something you'll be thinking about: