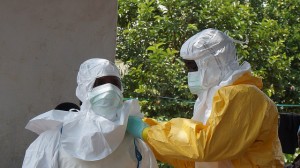 Toward the end of a BBC article on the tragic story of Ebola, a video provided by Street Child quietly whispers the story of African family members who have lost loved ones. Their subtitled words and talking eyes portray the humanity behind the sterile images of suited, goggled, and masked health workers.

While recalling their faces and words, I remembered reading about the day Jesus touched a man with a dreaded skin disease that may have been, in some ways, like the Ebola of our day (Mark 1:40-45). According to the Law of Moses, persons infected with “leprosy” were to be considered so dangerous that they were required to live outside the city and cry “unclean, unclean” as a warning to any one who came near (Lev 13:44-46).

According to the Baker Bible Encyclopedia, Jesus’ attitude was in marked contrast to other rabbis of his day. “One rabbi would not eat an egg purchased in a street where there was someone with leprosy. Another rabbi threw stones at lepers in order to keep them away.”

Today, we might think such rabbi’s insensitive and cruel. But they had reason to be concerned for themselves and their community. They had no less than Moses and the law of God on their side.

Fear and sadness. Leprosy and Ebola. Health workers and patients. Laws and protocols. Moses and Jesus. There must be more than a story here, somewhere.

« Previous: Moses, Joshua and Jesus Next: When God Withholds »
Vote on whether you think this post is something you'll be thinking about: