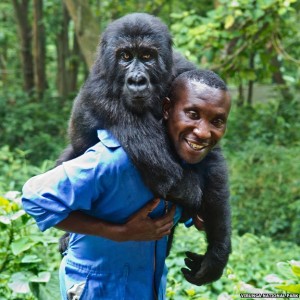 While thinking more about our Father’s world, I found an inspiring article in the BBC Online Magazine about Africa’s oldest national park. It’s the story of Andre Bauma, a park ranger, who describes how, in addition to his love for his family, has found a special place in his heart for an adopted orphan gorilla by the name of Ndakasi— who sees him as her mother.

Andre talks about his willingness to literally die for his threatened friends of the forest. And according to the article by journalist Vibeke Venema, his willingness to sacrifice is not exaggeration. Since 1996, 130 park rangers have died trying to defend the natural sanctuary. When regional warfare erupted, “everyone in the area was evacuated – except the rangers, armed with rifles. “I felt obliged to stay with the gorillas here,” Bauma says. “You must justify why you are on this earth – gorillas justify why I am here, they are my life. So if it is about dying, I will die for the gorillas.”

Makes me wonder what moves us more— a love for God that causes us to care for his creation, or a care for creation that reminds us of how much our God loves us.

« Previous: Her Father’s Zoo Next: As Philae Sleeps »
Vote on whether you think this post is something you'll be thinking about: