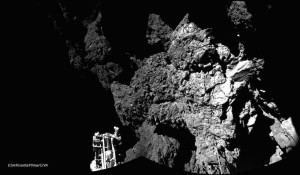 Some of us have lived long enough to remember the Russian accomplishment of putting Uri Gagarin in space, followed by the US achievement of landing Neil Armstrong on the moon. Now European scientists have given us a new memory—maybe even more amazing and unforgettable!!

Will we ever forget the day this week when we first saw those crisp images of a comet called 67p, known affectionately as “Churi”? Felt like a child again. Couldn’t imagine the 25 year vision and 10 year effort— and all of the math, science, technology and gift of human genius it took to to pull this off.

Isn’t it ironic though that the robotic mission lander has fallen, asleep, at least temporarily, for lack of light?

Seems to me that we might have something in common with Philae, even as she is hundreds of millions of miles from us, flying 40,000 mph through space on the back of a comet. While Philae tries to help its designers look for clues to the beginning of the universe, she too needs something as mystical and as mysterious as light to carry out the amazing mission of her designers.

If only Philae could only start tweeting on her own, from Churi…“Through him all things were made… without him nothing was made that has been made.…In him was life, and that life was the light of all mankind… The light shines in the darkness, and the darkness has not overcome it.” (John 1:3-5).

« Previous: The Heart of a Park Ranger Next: Simplicity and Complexity »
Vote on whether you think this post is something you'll be thinking about: