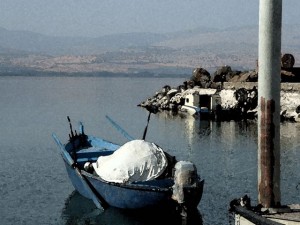 Galilee in the land of the Bible

This is an important question because there are many voices in the Bible. In its pages we hear our Creator quoted as saying, “Let there be light”, and Satan’s subtle challenge, “Did God really say…?”

Between the first words of Genesis and the last words of Revelation we find prophets and poets speaking in their own times and circumstances— among kings, queens, wise men and women, prodigals and seekers of God— many of whom are trying to understand God, themselves, or one another (as in the story of Job and his friends).

So why then is the Bible called the Word of God as if contains only the quotable words of our Creator? When we allow the Scriptures to speak for themselves we begin to find an answer. Within the pages of the Old and New Testaments we find (1) direct quotes of God (Gen 1:1-3; 1Sam 9:27); (2) reminders that we live by the provisions God speaks into our lives (Matt 4:4) (Deut 8:3); and (3) assurances that when God does speak, his words have their intended results (Isa 55:7-13). In addition the New Testament often refers to the word of God as (4) the good news of or about Christ (Col 1:5-6; 3:16); and (5) speaks of the living Christ as the ultimate and personal Word of God (Hebrews 1:1-3; 1John 1:1-3).

(4) and (5) deserve special attention. Some of the most compelling evidence that God speaks to us through the Bible is found in the ways its authors speak collectively in anticipation, or remembrance, of the Son who, in coming to our rescue, has fulfilled the story, laws, and predictions of what was written (Matt 5:17-18)— and revealed the heart of his Father (John 14:7-11).

If these are a few of the reasons the Bible has been called the Word of God, maybe they will help us remember, or to begin to understand, why the Apostle Paul referred to the writings we now call the Bible (lit. the Book) as an inspired (lit. God-breathed) gift (2Tim 3:16).

« Previous: Mindsight and Violence Next: The Spirituality of AA »
Vote on whether you think this post is something you'll be thinking about: