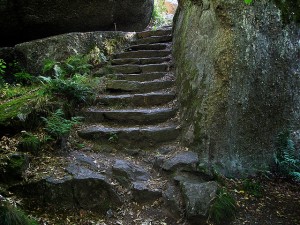 I recently heard a friend say that going to an Al-Anon meeting was like going to church. This person talked about what it was like to be able sit together in such broken love.

I’ve heard others talk or write about what it is like to walk into other12 Step meetings where they immediately feel accepted and affirmed not because of their successes, but because of shared need.

Some make a point of saying that while it’s obvious that they aren’t in church—and aren’t ready to darken the door of a church—they end up doing many of the things that are done in healthy churches (i.e. opening themselves to spirituality by praying together, surrendering to God as they understand him, listening to one another, admitting wrongs, making restitution where possible, asking and depending on the Spirit of God to restore thoughtfulness and self control, helping one another, and rediscovering a sense of purpose in living to help others.)

So, have been thinking that it might be helpful to take another look together at the basic steps of AA and see how we think they stack up against the kind of spirituality that many of us are experiencing in church.

Step One—We admitted we were powerless over alcohol – that our lives had become unmanageable.

Step Two—Came to believe that a Power greater than ourselves could restore us to sanity.

Step Three—Made a decision to turn our will and our lives over to the care of God as we understood Him.

Step Four—Made a searching and fearless moral inventory of ourselves.

Step Five— Admitted to God, to ourselves and to another human being the exact nature of our wrongs.

Step Six—Were entirely ready to have God remove all these defects of character.

Step Seven—Humbly asked Him to remove our shortcomings.

Step Eight—Made a list of all persons we had harmed, and became willing to make amends to them all.

Step Nine—Made direct amends to such people wherever possible, except when to do so would injure them or others.

Step Ten—Continued to take personal inventory and when we were wrong promptly admitted it.

Step Eleven—Sought through prayer and meditation to improve our conscious contact with God as we understood Him, praying only for knowledge of His will for us and the power to carry that out.

Step Twelve—Having had a spiritual awakening as the result of these steps, we tried to carry this message to alcoholics and to practice these principles in all our affairs.

Seems to me that, even though AA is set up to avoid affiliation with the church, or any sectarian group, it’s ability to help addicts, and those who love them, is rooted in writings that preceded the groups own Big Book.

Am guessing that among ourselves we probably have seen people use 12 Step Recovery sometimes as a step toward church… and sometimes away from it.

« Previous: Why is the Bible Called the Word of God? Next: Who Am I? »
Vote on whether you think this post is something you'll be thinking about: