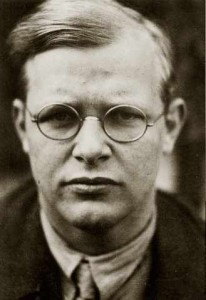 Dietrich Bonhoeffer is widely remembered as a German author and pastor who was arrested in 1943 for his role in resisting the policies of the Nazi government.

While in prison he continued to write and was assisted by sympathetic guards who smuggled his letters to the outside.

He was executed on 9 April 1945 as the Nazi regime collapsed, just two weeks before Allied forces liberated the camp and three weeks before Hitler’s suicide.

While much about his life, theology, and role in the resistance continues to be debated, Bonhoeffer wrote something called, Who Am I? that expresses how aware he was of the ways that his life, like our  own, can be so easily misread.

I wasn’t aware of this poem until an older acquaintance stopped by my table in the coffee shop the other day and urged me Google “Bonhoeffer” and “Who am I”.

Who am I? They often tell me
I stepped from my cell’s confinement
Calmly, cheerfully, firmly,
Like a Squire from his country house.

Who am I? They often tell me
I used to speak to my warders
Freely and friendly and clearly,
As thought it were mine to command.

Who am I? They also tell me
I bore the days of misfortune
Equably, smilingly, proudly,
like one accustomed to win.

Am I then really that which other men tell of?
Or am I only what I myself know of myself?
Restless and longing and sick, like a bird in a cage,
Struggling for breath, as though hands were compressing my throat,
Yearning for colors, for flowers, for the voices of birds,
Thirsting for words of kindness, for neighborliness,
Tossing in expectations of great events,
Powerlessly trembling for friends at an infinite distance,
Weary and empty at praying, at thinking, at making,
Faint, and ready to say farewell to it all.

Who am I? This or the Other?
Am I one person today and tomorrow another?
Am I both at once? A hypocrite before others,
And before myself a contemptible woebegone weakling?
Or is something within me still like a beaten army
Fleeing in disorder from victory already achieved?

Who am I? They mock me, these lonely questions of mine.
Whoever I am, Thou knowest, O God, I am thine!

According to an article in Wikipedia, at Bonhoeffer’s execution he was “stripped of his clothing and led naked into the execution yard, where he was hanged, along with fellow conspirators.”

« Previous: The Spirituality of AA Next: Terrorists, Jonah, and Jesus »
Vote on whether you think this post is something you'll be thinking about: