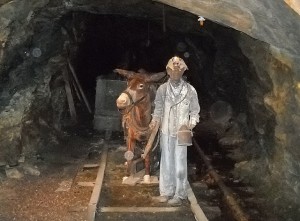 Some time ago I read an article in the BBC Online magazine about the 500 year old silver mines of Bolivia’s Cerro Rico mountain.

According to journalist Catharina Moh the tunnels that riddle the mountain are like a death trap for the men and boys who still lug wheelbarrows of rock to the surface. Locals call it “the mountain that eats men.”

Moh tells the story of fifteen year old Marco who works a night shift in the mine’s dimly lit tunnels so that he can go to school during the days. Covered in sweat and dirt, he breathes the silica dust that leave miners with an average life span of 40. Since his father walked away, his mother and younger brothers couldn’t survive without his wages.

We know Marco only because of the journalist who wrote about him. But his story is familiar. Like Ishmael, the first son of Abraham, he didn’t ask to be born. He didn’t choose the father who had too many of his own problems to be able to provide for him. Neither was he chosen for a special purpose like his younger brother Isaac.

In the record of Genesis, Ishmael’s rejection started even before his birth. Soon after Hagar, his Egyptian domestic mother, became pregnant, she was thrown out of the house into the desert by Sara (Gen 16:1-14). It happened again several years later when Ishmael was just a young boy (Gen 21:14-21).

Yet both times the record makes it clear that, even though Hagar and her son were the result of Sara and Abraham’s poor judgment, the Father of heaven was watching. He loved Ishmael and his mother, and had a plan to bless their “unchosen” lives. Hearing their cries he assured them of his presence. He gave them a hope far beyond the wilderness that seemed ready to consume them.

Thousands of years later, the New Testament reflects on the ongoing generational implications of God’s love for both his chosen and unchosen people.

In the Apostle Paul’s letter to the Romans he writes as a chosen servant who could wish himself cursed from Christ if it could result in the salvation of his Jewish countrymen (Rom 9:1-5). Then in one of the most controversial passages of the New Testament he goes on to defend God’s right to choose some at the apparent expense of others (Rom 9:6-16).

Some interpret what Paul says about God’s choice of some over others as his right to mercifully grant eternal salvation to some— and not to others. Other interpreters believe the implications have more to do with being chosen or not to be God’s special “chosen nation” or “chosen ambassador” for Christ.

In any case, before Paul is done with the subject of “the chosen and unchosen” he has made a case that seems to level the ground as far as God’s ultimate purposes in election. While this section of his letter begins on a low note of agony (Rom 9:1-5) it ends on a high note of praise. Paul goes on to conclude that God concludes all in sin and unbelief so that he may have mercy upon all (Rom 11:29-32). Then he gives us one of the most wonderful expressions of praise we will ever read (Rom 11:29-36)

Even though Paul doesn’t answer all of our questions, he gives us reason to believe that there is a lot we have not yet been told (Deut 29:29).

« Previous: Is God Like the Weather? Next: Holy What? »
Vote on whether you think this post is something you'll be thinking about: