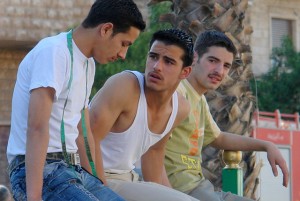 Flikr photo by Charles Roffey in the … Land

For much of my life I’ve had trouble with the word holy— and with those who seemed to love and long for it. My associations with the word— didn’t seem to put a good face on God.

Left me thinking of him as distant, frightening, and not like someone I want to be with.

So once in a while, I try to take another look— wondering what’s wrong with me, and what’s not to be not liked about this word that ends up being repeated over by people and angels who find themselves in the presence of their Creator.

The first time the word shows up in the Bible is at a burning bush in the wilderness of Sinai— a bush that burns mysteriously without being consumed. There, a fugitive murderer is told to take off his sandals, because he is standing on holy ground (Exo 3:5).

Next, I find the word used of a series of meetings, places, furniture, and people associated with God. Several different sources agree that the word implies “apartness”— something set apart… to be different, for a special purpose.

At this point a dim and flickering light goes on… maybe. No wonder I have an uneasy aversion to a word that seems to go back to my early days in church. What child wants to be special— “different”, “set apart” from others?

But is that all there is to my aversion? If so, then… when my thoughts eventually turn to Jesus, why don’t I think of him as being “holy”. Doesn’t make sense. If anyone is holy, it would be him. Yet even when I do a software search, I find only a couple of places where the Jesus of the Gospels is called holy. One is a reference to him as conceived— but not yet born. On a couple of other occasions, tormented demon possessed people are calling him holy as if to expose him for the who he really is (Luke 4:34).

With only a few exceptions, the other uses of holy in the Gospel accounts are to the Holy Ghost— at least in the King James Version of the Bible that I grew up with. Over and over it is the Spirit of God who is called holy.

Then another thought. Could it be possible that Jesus isn’t often called holy in the Gospels because… together with him, (probably without  realizing it) the inspired Gospel writers are trying not to scare us away? Could it be that, in Jesus, the Creator is sneaking up on his creation, under the cover of a common body, to eventually surprise us with how good and wonderful our Father— really is?

Thoughts continue to follow in step with one another until… am wondering whether even the Holy Ghost might have quietly eased into our lives, gently doing his work, until we  begin to long for what Paul calls the fruit growing in (think it but don’t say it) ground (Gal 5:22-23).

If you don’t share my childish uneasiness— am thinking that maybe you’ve grown more quickly than I have beyond my wonderful, overly protected, and probably indulged childhood :-)

« Previous: The Unchosen Next: Dark Thoughts »
Vote on whether you think this post is something you'll be thinking about: