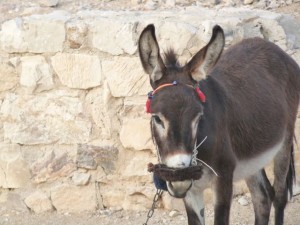 In “He Still Moves Stones”, and as quoted in his “Grace for the Moment” inspirational guide, author Max Lucado suggests that, “Sometimes God is so touched by what he sees that he gives us what we need and not simply that for which we ask. It’s a good thing”, Lucado adds, “For who would have ever thought to ask God for what he gives? Which of us would have dared to say: “God, would you please hang yourself on a tool of torture as a substitution for every mistake I have ever committed.”

Because we are still living in a place— where appearances can be deceiving; where emotions can be misleading; where inspired words can be misunderstood; where faith in our own understanding can seem like faith in God, and where our own sins can seem worse than the price already paid for them, we may wonder at times whether we are going to be able to hang on… until we discover what it means to be held by the One who is already holding us— in his own nail scarred hands (John 10:28-30).

« Previous: Dark Thoughts Next: What are we Thinking? »
Vote on whether you think this post is something you'll be thinking about: