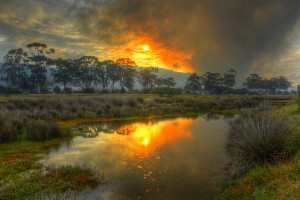 The 12th Chapter of Hebrews ends with a sobering thought: “Therefore, since we are receiving a kingdom that cannot be shaken, let us be thankful, and so worship God acceptably with reverence and awe, for our ‘God is a consuming fire.’”

Without the 13th chapter break, what are the very next words? Why would they be, “Keep on loving one another as brothers and sisters,“ followed by encouragement to care for those who are outside of our own group, including those who are in prison?

If we take a step back from these two verses— separated only by an artificial chapter break, we see that earlier in chapter 12 the author likens God to a loving Father who corrects us because he loves us (Heb 12:5-6). Then the author moves on to contrast this enlightened understanding of a Father’s love with the fire that had terrified Moses on the heights of Mount Sinai (Heb 12:21).

Many centuries later, we find ourselves in the Spring season of ancient holidays. Together they help us recall that, on the day we call Pentecost (“50” days beyond Passover), the Spirit and Presence of Christ came like tongues of fire that seemed to separate and rest on his people (Acts 2:3).

Like a loving Father, and a consuming fire—  this is the story of a God wants us to be afraid of not trusting him… and not walking in the assurance of his care…

« Previous: Backward and Forward Next: Inside Out and Outside In »
Vote on whether you think this post is something you'll be thinking about: