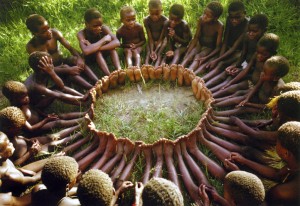 A story is going around the internet that, in some ways, sounds more like legend than fact. But the idea behind it seems to represent a cultural value that is real.

As related on an Ubuntu website, an anthropologist made an important discovery after completing his study of a tribe in a southern region of Africa. While waiting for transportation to the airport for his return flight home, he decided to pass the time by proposing a game to some of the neighborhood children. He placed a basket of candy and fruit near a tree and, after getting the children behind a starting line, told them that the winner of a race to the tree could have all the contents of the basket. But when he gave the signal to run, no one made a dash for the finish line. Instead the children joined hands and ran together to the tree and basket. When asked why they chose to run as a group, a little girl spoke up and said: “UBUNTU, how could one of us be happy when all of the others are sad?” UBUNTU in the Xhosa culture can be expressed as, “I am because we are.” After many months of research the anthropologist realized he had finally discovered the heart of what he had been studying.

The story has me wondering at what point the Apostle Paul discovered that the complicated culture of laws that he had studied so carefully could be, in Christ, summed up (though not fully illustrated) in the experience of one thought (Gal 5:14).

Am also wondering whether this is an idea that can be really understood— theoretically, or more like the way a child learns that eating ice cream is better than touching a hot stove…

« Previous: Behind and Beyond the Veil Next: Living in the Spirit »
Vote on whether you think this post is something you'll be thinking about: