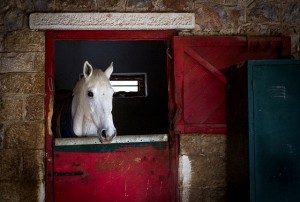 The ongoing debt crisis that has become such a defining moment for Greece and the nations of the Eurozone might be a parable for the world. What do you do with a debt that cannot be paid?

Many believe that to cut Greece from the Union would amount to the imposition of a national foreclosure that no one can afford. Not Greece. Not the European Union. Not the nations of the world.

Am wondering if there is also an echo in these events of the prophet Isaiah speaking to Israel in exile. The Lord of lords had made the people of Jacob an example and international showcase of his love, and his judgment. Now, says Isaiah as he looks into the future, Israel’s hard work will be over. She will have paid double for her sins, and what will remain will be a promise of something far greater than she or anyone could ever imagine (am assuming here that the prophet is speaking in a “prophetic past tense” as he does in chapter 53).

The vision was one for the future— for Israel, and for the nations of the world—and us

In mysterious prophetic language that we now understand (in part) better than the people of Isaiah’s day— the prophet declares that God is coming to Jerusalem to buy back his people and to show that there is a great mercy in his judgment.

In this vision, we hear the voice of one crying in the wilderness to prepare the way for the God who would make himself a sacrifice for our sins. What we don’t yet see is how the promise is yet to play out in full for Jerusalem and the nations.

What does seem unavoidable is that in choosing Israel, God is choosing one for all. One nation to reveal himself. One nation to be blessed and to suffer—even double for its sin. One nation to represent all nations in our need of the God who alone has answers for our insurmountable and all encompassing debt. One nation to give us the Son whose death and resurrection is our only comfort and hope.

Am writing while thinking about today’s news, Isaiah 40:1-31, and then the amazing lingering promise of Isaiah 60-66.

« Previous: Echoes of the Garden Next: Tired in Trying »
Vote on whether you think this post is something you'll be thinking about: