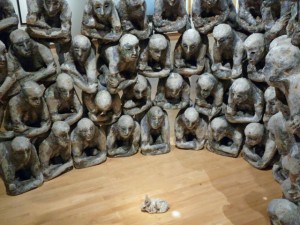 We’ve talked in the past about riddles. I think my favorite is: The poor have it. The rich need it. If you eat it you die. What is it?

As we all know, riddles work by play on words; by layers of double meaning or ambiguity understood by the speaker but not revealed to the hearer.

While a light approach to riddles might be something like, what did Adam say to Eve the day before Christmas?, the best riddles are those that cannot be answered until their wisdom/wit is revealed.

I’ve written the last few posts with what might be called the first riddle of Christmas in mind. To the Serpent the Lord said, “I will put enmity between you and the woman, and between your seed and her seed; He shall bruise your head, and you shall bruise his heel.” Genesis 3:1

With words of promise wrapped in mystery the Lord went undercover to ultimately pull off the greatest sting in history— when the answer of the riddle was finally revealed. Yet going forward, there was enough clarity to trust a good Creator who was promising in veiled words to respond in wisdom to the shrewdness of his enemy.

Who ever would could have thought (going forward) that our God would wrap himself in the flesh of a crying baby; or groan with us in our sin; or cry out in his execution like a sinner—to bear the ultimate rage and violence of our deception and rebellion?

For those of us who have lost a sense of the wonder that must have filled the minds of the wise men/magi who slowly made their way westward, following a star, it might be helpful to think again about how riddles work. Think about the difference between reading the Story of the Bible… like we are trying to read our own lives, forward— before the infinite goodness and genius/wisdom of our Lord’s own answers are given…

And by the way…

« Previous: Self-Opening Gifts Next: Hearing the Joy »
Vote on whether you think this post is something you'll be thinking about: