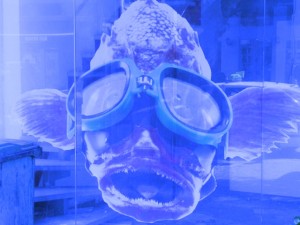 Jonah’s story ends abruptly. We’ve been given narration, dialogue and miracles. Like so much of the Bible we’ve been told what sounds like a tall tale— but haven’t been told what we are supposed think or conclude. All that is truly clear is that Jonah is not on the same page as his sender or the citizens of Nineveh.

We also know Jesus will eventually use Jonah as a parallel to himself. He’ll say, “What happened to him (Jonah) was a sign to the people of Nineveh that God had sent him. What happens to the Son of Man will be a sign to these people that he was sent by God” (Luke 11:29-30).

But another thing is clear. Jonah is no Jesus. The teacher himself said, “Now someone greater than Jonah is here.” (v32)

In other words, in some ways Jonah prefigures One who is like him, but also different— and far greater.

So we have this much— Jonah is in the Bible not only because of the prophet’s Jewish ancestry but also because he has reluctantly accepted a bit part in a far greater drama.

Is there any point in thinking more about other elements of the story? For example, what about when Jonah is asleep in the boat that is suddenly caught in a storm that is threatening to sink the ship? Do we hear any echoes in something that happens later? In light of what Jesus would later signal— that there is both comparison and contrast between himself and Jonah, could there be any value in thinking more about these comparisons and contrasts— even if it feels at first as if we are just speculating?

Hang with me :-) …. Let’s stay with the comparisons and contrasts that we see in this Jonah who is no Jesus—sleeping in a ship caught in a miraculously terrible storm. We might already know just enough to realize that we’ve been given permission to reflect and guess until the story takes on fresh and helpful life… (i.e. that the parts of the Bible can be considered and explored in the light of the whole)

Looking back would such reflection have been the kind of thinking that might have been done by a generation immersed in the stories of the Scriptures of Israel– now challenged by Jesus to believe (that in some unexplained way) these Scriptures helped to tell his story?

« Previous: What is it About Jonah? Next: Jonah and Jesus— for Openers »
Vote on whether you think this post is something you'll be thinking about: