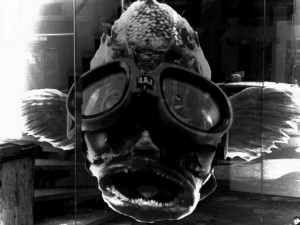 Fearing for their lives, the crew called out to their gods and did everything they could to save the ship and themselves. Desperate, the captain went down into the hold, woke Jonah up, asked how he could sleep at a time like this, and urged him to cry out to his god for help.

Meanwhile the crew resorted to a game of fate to try and determine who among them had made the gods so angry. When the “spinning bottle” pointed to Jonah, they started asking questions.

Seeing the fear in their eyes, Jonah told them what he knew and that their only hope was to give him to the waves. Not wanting to throw their passenger overboard, the crew tried even harder to get control of their ship—as the storm got worse.

Finally, they did what Jonah wasn’t yet ready to do. They prayed to his God.  “O Lord,” they pleaded, “don’t make us die for this man’s sin. And don’t hold us responsible for his death. O Lord, you have sent this storm upon him for your own good reasons.” 15 Then the sailors picked Jonah up and threw him into the raging sea, and the storm stopped at once! The sailors were awestruck by the Lord ’s great power, and they offered him a sacrifice and vowed to serve him”

From the mariners’ point of view, Jonah had breathed his last. At his suggestion, they had sacrificed him to save their own skin.

Jonah is no Jesus. By his sin he brought the ship’s crew into great danger— and, in spite of his sin,  into a personal knowledge of the living God… whom they now gratefully vowed to serve.

Meanwhile, far below, in a place the sailors could not see, Jonah was coming to his senses. From “the land of the dead” (2:3) Jonah prays like the former pagans above, acknowledging that those who worship false gods turn their back on his mercies— and ending with a similar vow to serve the God he had told them about (2:1-10). (When you get a chance read the whole prayer. It’s a huge stretch in light of where it comes from, what has happened— and is yet to happen.)

And this is the little whale story, with such huge implications of comparison and contrast, that some of us learned as children…

« Previous: Jonah and Jesus— for Openers Next: Why Jonah Ran »
Vote on whether you think this post is something you'll be thinking about: