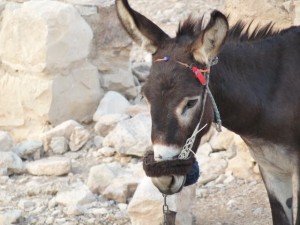 In our last post we talked together about how in the 9th century BC, the prophet Elisha counseled the king of Israel not to kill his prisoners of war. As a result, Joram (king of Israel) prepared a feast for the soldiers of Ben-Hadad (king of Aram/Syria) and sent them home. After that, we’re told, that Aramean forces stopped their cross border raids into Israel (2Kings 6:21-23).

One take away we observed is that “the best way to deal with enemies is to make them into friends.” It’s a good thought and practical outcome.

But there’s a problem. The peace was temporary. The next words we read in the unfolding story is, “Some time later, however, King Ben-hadad of Aram mustered his entire army and besieged Samaria. As a result, there was a great famine in the city. The siege lasted so long that a donkey’s head sold for eighty pieces of silver, and a cup of dove’s dung sold for five pieces of silver” (2 Kings 6:24-25).

That isn’t the worst of it, the record of Israel goes on to say that things got so bad that starving mothers began cannibalizing their own children.

What happened? How could a moment of high ground move us so precipitously into events that are even difficult to talk about so many years later?

Seems to me that the answer to this question helps us to understand that the Bible is more than an ancient compilations of practical moral lessons.

In this case the supernatural displays and wisdom of Elijah and Elisha were meant to show what happens when a “messenger nation” stops relying on its God. The problem was not that the Aramean people were a nasty group of violent people. It was that the king and people of Israel were no longer acting as if their hope and life were found in the God who had rescued their ancestors from the slave yards of Egypt.

Israel had been called by God to do what Elisha was now called to do— show the neighbors at home and across the border what it means to live from the hand and security of the God who made us for himself.

Ancient Israel and the present Church of Christ have a similar role. The difference is that our crucified and resurrected Savior points to a God who is, as it turns out, far more loving, humble, and merciful than the people of Israel thought he was.

What we see in Jesus is the God of Genesis, and the God of Elisha. But he’s no longer asking us to live by the law of Moses to reveal the heart and ways of God to the world. He’s asking us instead to live in the Spirit of Christ (Gal 5) in the face of our enemy— regardless of whether, in the short run, it seems to work or not.

Seems to me that the implications are important for followers of Christ in any age. Hasn’t it always been a challenge to live by the spirit of Christ in the presence of legalistic religious leaders— and economies that are wired to someone’s material excess and political strength— rather than to the Christ-like Spirit of our God?

« Previous: Serious Comedy Then and Now Next: Transformative Spirituality »
Vote on whether you think this post is something you'll be thinking about: