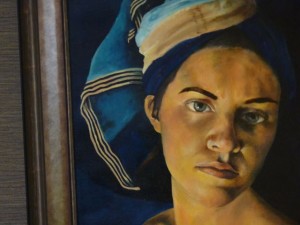 King David’s great-grandmother was a Moabite by the name of Ruth. But who was his mother? She is referred to in the Bible (1Samuel 22:3-4), but not named. Only by a tradition of the Jewish Talmud are we told that David’s mother was an Israelite by the name of Nitzevet, the wife of Jesse, and an ancestress of the Kings of Judah.

David does allude to his unnamed mother several times in his songs (i.e. Ps 22:9-10; 27:10; 51:5; 69:8; 71:6; 139:13) and his last reference is the one most often quoted. Without the presumptive and misleading knowledge of modern science, he seems overwhelmed by the thought that it was in the mysteries of his mothers womb that the Lord took a personal interest and hand in forming him (Psa 139.13).

David speaks of the womb as an example of the darkness in which God sees and works (Psa 139:11-12). Yet so conscious is he of the light that I’m wondering whether, in that same moment, he lost himself in the glare. In the middle of praising the wonder of God’s all knowing presence, the King suddenly remembers his enemies, and how perfectly right it is for him to hate them (Psa 139:19-22).

Psalm 139:19–22 (NIV) 19 If only you, God, would slay the wicked! Away from me, you who are bloodthirsty! 20 They speak of you with evil intent; your adversaries misuse your name.21 Do I not hate those who hate you, Lord, and abhor those who are in rebellion against you 22 I have nothing but hatred for them;I count them my enemies.

But is he sure about that? The day would come when One of his sons would give us reason to think otherwise (Matt 5:43).

What do you think? Is it possible that David, while musing in the light and memories of his God, and mother, might have sensed something dark within himself—that prompted him to ask for help— to see danger hidden in the shadows of his own natural fears and anxieties?

In any case what greater honor could a mother be given than to be used by our Father in heaven to give us the gift of life, and a chance to know and rely on him?

« Previous: A Time to Laugh Next: Imagine »
Vote on whether you think this post is something you'll be thinking about: