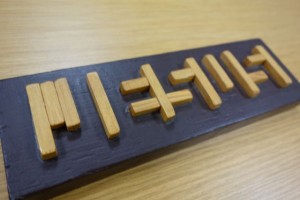 In the previous post, “What’s Wrong With this Picture?” the close up of the ant sculpture in the Atlanta Airport shows what happens when perspective is missing.

My guess (trying to read the lines, and between them) is that when Paul says to the divisive church in Corinth (inconsiderate of one another, and drinking to their own loss at the Lord’s table <1Cor 11:18-19>)— he was writing with the same perspective that caused him to end his letter writing, “if someone has no love for the Lord let him be accursed” (1 Cor 16:23)… “My love be with you all in Christ Jesus. Amen” (v 24).

Prior to, and between these chapters, Paul wrote of the suffering and crucifixion that revealed the heart of God for us. In chapter 13 Paul described what that same love looks like when it shows up in the Lord’s people.

If Paul is writing with the same perspective in 11:18-19 and 16:23, then the key to understanding what he is saying must have something to do with the love that was brought to ultimate expression in the Cross, and the love in which Paul ends his letter (16:24).

So what does the love of the Cross have to do with Paul’s two statements that “there must be divisions to see who is approved of God” and “if anyone love not the Lord, let him be accursed”?

I might be wrong, but seems to me that whether we handle our divisions in such love can be an important signal to ourselves (and possibly to one another) as to whether we have the love and approval of the Lord (and his cross) in us. And if we don’t have such love in us, then a loving God and messenger want us to see that our loveless spirits are under the curse of that which is mindless, worthless, and of no profit to us (1Cor 13:1-3).

As for the ants… they’ve been designed to work together for their shared benefit, and to the honor of their Creator– when the seasons change.

« Previous: What’s Wrong With this Picture? Next: Apocalypse has Begun »
Vote on whether you think this post is something you'll be thinking about: