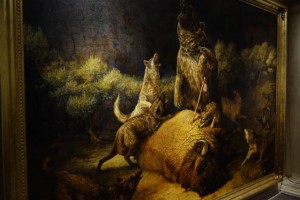 In everyday usage, the word apocalyptic represents horrific events that preview the end of the world as we know it.

When used of the Bible it suggests a cosmic unveiling, intervention and new world order.

Normally, we think of apocalyptic events as future. But, according to the Gospel, the greatest of all revelations has already begun.

Jesus’ horrific suffering, death, and triumphant resurrection marked the end of the age.

When he allowed himself to be crucified to bear the full consequence of our rebellion, prophetic visions were realized. An age of Law came to an end. The reality behind the symbolism and ritual of a Temple-based religion was unveiled.

The extent of the carnage was revealed but not understood. When Jesus died at our hands, we died. Our identity in Adam was forever consumed in the fire of our Savior’s love.

In hearing and accepting the Gospel, we wake to find that we’ve survived the worst that could have happened to us— or our God. When Jesus was buried, we were buried. When he rose, we rose—to eternal life… and to a new world order already begun though not fully realized.

« Previous: Looking for What’s Missing Next: Our Father’s Business »
Vote on whether you think this post is something you'll be thinking about: