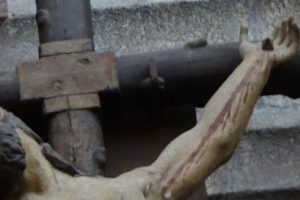 Threat for threat. Insult for insult. Wrong for wrong. Bluff for bluff. Blood for blood…

The broken-rule promises the upper hand, control of circumstance, and self-protection.

Yet it drags us to the threshold of mutually assured destruction.

“Sympathize with each other… Don’t repay evil for evil. Don’t retaliate with insults when people insult you.. To this you were called, because Christ suffered for you, leaving you an example, that you should follow in his steps…When they hurled their insults at him, he did not retaliate; when he suffered, he made no threats. Instead, he entrusted himself to him who judges justly.” (1Peter 3:8-9; 2:21-24 NLT).

Can we believe it? Did he really take the worst insults, lies, and torment we could throw at him—so we could hear him say, “Father forgive them. They don’t know what they are doing” (Luke 23:34)?

And could he possibly have said to a murderer who had been ridiculing him— before realizing he was mocking a different kind of King—  “Today, you will be with me in paradise” (Luke 23:43)?

« Previous: State of Emergency Next: Law and Order »
Vote on whether you think this post is something you'll be thinking about: