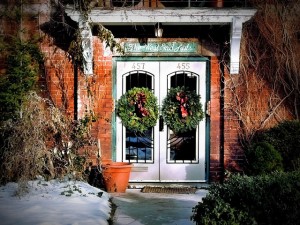 Why did the Savior of the world need to be born with so much acclaim— only to be followed by 30 years of silence— before stepping onto the stage for which he came?

Why couldn’t the Lamb of God just show up like one of those Old Testament prophets who seemed to step out of nowhere… to get on with it, without dragging so many people through news that didn’t seem to go anywhere?

Why did anyone have to endure Elizabeth’s untimely pregnancy, rumors about Mary, commotion in the temple, in the skies over the shepherds fields, in Herod’s court, and then in the streets of a city troubled by the rumor that the long awaited king had been born— only to be followed by 30 long years of nothing?

Thirty years is a long time. Long enough to forget a lot. To lose hope.

According to Jesus’s forerunner, God could have raised up Jewish sons out of the stones that were everywhere. So why didn’t he do something like he did in making Adam, without a childhood, out of the dust?

Maybe the answer is somewhere in the bigger story of the promise to Eve about the seed of the woman, in a series of miracle births to childless couples, of generation after generation that put its hope in sons who lived, more or less, like the fathers before them.

As it turns out the Savior of the world shared our experience, from infancy to the grave, for better and worse.

Maybe there is far more wrapped in those 30 mysteriously normal years than we ever imagined in that one Silent Night. Maybe those miracle-less years allowed the Son of Man to experience what we know all too well—and even more, if he bore the pain and strain of our humanity without reaching for the nerve deadening self-deception we use to temporarily alleviate our pain.

« Previous: In the Dark of the Night Next: Child-Like-Ish »
Vote on whether you think this post is something you'll be thinking about: