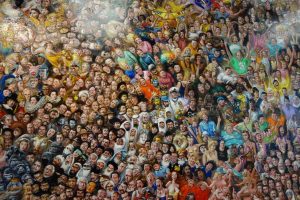 A bitterly polarized nation is one thing. A divided body of Christ is another.

As Jesus’s mission of rescue neared its moments of tragic surprise, he prayed that his disciples would have such unity that the world would see the truth about him and the Father who sent him (John 17:18-26).

Later, Paul also focused on the importance of oneness among followers of Christ— who had no trouble finding things to disagree about.

But did Jesus or Paul ever suggest that people of the truth could, would, or should think alike about their diverse interpretations about almost everything? Seems to me that they advocated the kind of unity that comes by learning from one another… and when necessary, agreeing to disagree (Romans 14:1-19).

That being said, who can deny that, as Jesus’s tragic mission of rescue showed, there is a time to go it alone—in a spirit of self-sacrificing care and concern for one another—and others.

« Previous: Glances and Glimpses Next: A Final Solution »
Vote on whether you think this post is something you'll be thinking about: