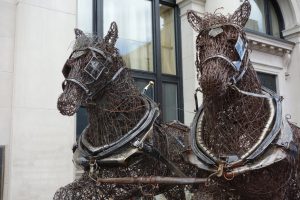 I’ve spent quite a bit of time lately with recent YouTube videos and writings of Andy Stanley on a subject that has compelled him to take some risks.

Andy’s current video series, “The Bible for Grown-ups—last things first”, offers his reasons for writing “Irresistible” in an effort to explain the life-changing difference between the Old and New Testaments.

While affirming our many reasons to treasure the Law, Writings, and Prophets, Andy is getting pushback for suggesting that we need to “unhitch” ourselves from the expired covenant of Sinai.

My sense is that many are misunderstanding and misquoting Andy in his attempt to clarify the wonder of life in Christ— and counter winds of information that are having such an impact on our young people. It’s evident that he’s deeply concerned about the influence of a group of professors and authors who are leveraging a global Internet to call attention to the violence of the God and people of the Old Testament.

My take is that Andy has a message that needs to be carefully considered.

I’m fairly certain that when he says that for the last 7 or 8 years he’s been quoting David, Moses, Matthew, and Paul rather than what “the Bible says”, and— and that when he makes the claim that our faith doesn’t rest in the Bible, but in the resurrection of Jesus, he isn’t just trying to be controversial. I believe him when he talks about how much toxic information has been promoted in the name of the Bible— and that we wouldn’t have a 2-Testament-Book if Jesus had remained in the grave. Neither would we have a way of life grounded—not in the rule of law—but in the liberating Spirit of his love for us.

I’ve hesitated to weigh in too quickly on the waves of disagreement that have made “The Bible for Grown-ups” and “Irresistible” a matter of rumor and alarm. But I’m convinced that Andy has hold of something that could help explain why so many in our day would say that the B-I-B-L-E no longer has a hold on them.

« Previous: Who for Who? Next: Blowin’ in the Wind »
Vote on whether you think this post is something you'll be thinking about: