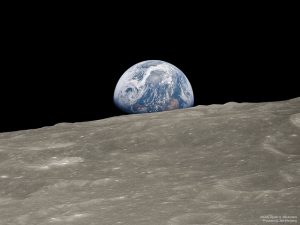 Fifty years ago, Bill Anders of the three-man Apollo 8 flight crew took a picture of earth that changed our view of the world.

In an article for Space.com, he describes what it was like to give us a different picture of ourselves at a time when our world seemed to be unraveling. He recalls “The assassinations of Dr. Martin Luther King, Jr. and Robert Kennedy, the Vietnam War and the protests against our involvement there, and the Cold War divided us against ourselves and against the world. Forces from within and without threatened us. Everywhere, tensions ran high. Still, millions of Americans, and  a billion people worldwide tuned in on Christmas Eve to watch our crew’s live television broadcast from space.”

Am wondering whether Ander’s experience gives us a taste of the different ways the Apostle John describes our world. On one hand, he writes, maybe quoting Jesus in his own words, “For God so loved the world that he gave us his only Son” (John 3:16). Then in a later letter, the same author urges, “Do not love this world nor the things it offers you, for when you love the world, you do not have the love of the Father in you.” (1John 2:15).

The word John used for “world” (kosmos), suggests the idea of the whole and totality of how things, people, and nature are ordered. In other words, it’s the big picture of how we are, and how things work—how everything and everyone is arranged or rearranged in a world of nature and people.

So, on one hand, we get a picture of how our Creator looks at the whole and totality of us. Then we get another picture of how our rearrangement of everything— based on how we see things, what we want, and how feel about ourselves— is working for us.

« Previous: Herod the Great Next: Does Love Make us Gullible? »
Vote on whether you think this post is something you'll be thinking about: