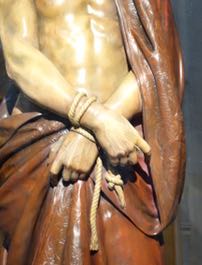 Night had fallen in a Privileged  Land. The forces of evil were winning. Good efforts were being overruled. Something had to be done.

So, Elijah called down fire from heaven that consumed wet wood on an altar of challenge. With his sword  (in the ways of a violent age) he killed 400 prophets of Baal. But when he heard that the Queen had vowed to kill him, he ran for his life. Exhausted and confused, he complained that even though he served the almighty God, the other side was winning.

Then, once again, Elijah’s Almighty showed up. But this time he revealed his presence in an unexpected way. Not in a powerful windstorm. Or in a mighty earthquake. Or in a roaring fire. But in “the sound of a gentle whisper” (1Kings 19:12) NLT).

For Elijah and all who’ve heard his story, it could have been a learning and defining moment. But not necessarily. Believing there also had to be justice, the Jewish nation waited centuries for a Liberator who, as the Son of David, would draw blood with the sword.

You know the story. Eventually, when a Roman governor asked Jesus if he was the king of the Jewish people, the teacher said his realm was of a different kind. He said that if he was like other rulers, his supporters would have fought to prevent him from being turned over to the leaders of his own people.

Am guessing that most of us have also heard— that later, a once violent man by the name of Saul came to believe that one evidence of the Spirit and presence of God is… gentleness. Known now as Paul, his words echoed a half-brother of Jesus who wrote that the wisdom that comes from God is— gentle.

Peter, who also learned his humility the hard way, expressed a similar thought when he urged leaders of Jesus’s followers not to Lord it over those under their care.

Yet, yes, as often as we’ve heard it, non-violent gentleness is counterintuitive to those of us who, like Elijah, feel that the other side is winning, and by all available means—must be stopped.

My guess, though, is that in our better moments— most of us know that the Kingdom we are helping or hurting is anticipated, honored, and expressed in the courageous gentleness of the Lamb.

« Previous: The Humility of God Next: The Way Forward »
Vote on whether you think this post is something you'll be thinking about: