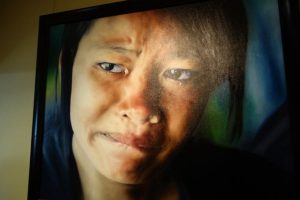 I’ve become increasingly convinced that just about anything someone believes about religion, politics, our national constitution, and more importantly the Bible and the words of Jesus, can be countered with— another written text from the Bible.

In many cases the issue isn’t worth living, dying, or risking one’s reputation for. Sometimes, however, and especially when the lives, well-being, love, hope, and faith of others seems to be at stake, I’m thinking it is worth wading into the endless weighing of texts and reasons for trying to understand which written words need to be understood in light of other written words.

For example, anyone who’s been following my increasingly infrequent posts has probably noticed my opinion that everything the Scriptures say about God’s anger, judgment, justice, election, holiness, and righteousness needs to be understood in light of his love for all— rather than just his love for some.

For that reason, I have become increasingly attached to texts that seem to indicate that in the ages to come the justice of God will be seen as an expression of his love and mercy which are forever— rather than his anger which is but for a moment.

Yes, but… I know. Other texts seem to say that, in the end, relatively few will be saved and that the great majority of people will end up in everlasting conscious regret and even torment.

Because I’m not willing to go there, I feel obligated not just to fade away into the sunset, but at least to offer some reason before I’m done as to how I can claim to believe in the God of the Bible and still believe in The Greater Hope that many texts seem to allow for. If I get a chance to do that, I’d like to quote others without implying that they would or would not agree with my thoughts on the subject.

One such person is a British theologian by the name of John Stott who has fairly recently passed from this world into the next. Without implying that he would appreciate being quoted by someone like me, I’m taking the liberty of copying below something that I found in his commentary on The Letters of John. I think he said something very important when he wrote,

“Not only is God the source of all true love; he is love in his inmost being. There are three other statements in the New Testament concerning what God is in substance and nature: he is ‘spirit’ (John 4:24), ‘light’ (1 John 1:5) and ‘a consuming fire’ (Heb. 12:29 from Deut. 4:24). The Gnostics believed that God is immaterial spirit and light, but they never taught that God is love. It is the most comprehensive and sublime of all biblical affirmations about God’s being, and is repeated here twice (8, 16).

Nevertheless, it is important to hold the biblical assertions about God together. It is true that the words God is love mean not that loving is ‘only one of God’s many activities’ (Alexander) but rather that ‘all his activity is loving activity’ and that, therefore, ‘if He judges, He judges in love’ (Dodd). Yet, if his judging is in love, his loving is also in justice. He who is love is light and fire as well. Far from condoning sin, his love has found a way to expose it (because he is light) and to consume it (because he is fire) without destroying the sinner, but rather saving him.”

Note: Please remember that for several years, this blog has not been affiliated with Our Daily Bread Ministries which is not responsible for anything I write here.

« Previous: Beyond the Curtain Next: So Why Then the Gospel? »
Vote on whether you think this post is something you'll be thinking about: